We are proud to announce that two dancers will be promoted next season. We send a huge congratulations to Nathalia Arja and Leanna Rinaldi!

Originally from Rio de Janeiro and a graduate of MCB School, Nathalia joined MCB as an apprentice in 2009 and was promoted to corps de ballet in 2011. Three years later, and after performing lead roles in Ballo della Regina, Polyphonia, Tschaikovsky Pas de Deux, and even the coveted Sugar Plum Fairy, among others, she will kick off the 2014-2015 Season as a Soloist! We asked Nathalia how she reacted to the exciting news. Read on to find out!

When I first found out I got promoted I was literally in shock. When our Company Manager told me that Lourdes [Lopez] wanted to talk to me, I would never guess it would be about a promotion. So right after Lourdes told me the news, my first thought was, ‘are you sure?’ Then, my second thought was, ‘oh my God, where is my mom?’ There were just so many crazy feelings in less than five seconds! It was indescribable and I remember leaving the room sobbing, then started running around looking for my friends because I couldn’t keep the news to myself. I had to tell them right away. It was definitely one the the best days of my life for sure. I’m just so thankful. Since I heard the news, I have kept repeating to myself, ‘Oh my God, I got promoted!” I still cannot believe it. 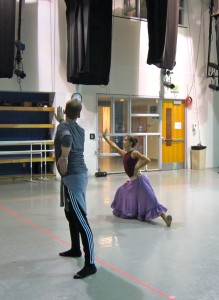 Leanna is a Texas native who joined MCB as an apprentice at the beginning of this season, after graduating from MCB School. In just her first year with the company, she has had several opportunities to shine onstage, particularly when she was selected to perform Nacho Duato’s Jardí Tancat — a demanding, contemporary work that features only six dancers onstage (read about her experience performing the work here).  After just one year as an apprentice, Leanna will begin the 2014-2015 Season as an official member of the corps de ballet. Read about her reaction to the big news below:

When Lourdes told me that I was invited to continue on in the company as a corps de ballet member, I was ecstatic. Receiving the contract in the mail was the best part. I’ve been working for this moment my whole life. All the sacrifices and hard work led to holding a contract in my hand. I couldn’t ask for anything better than getting to do what I love for a living. I’m thrilled to officially be apart of this company.

Lookout for these rising stars onstage during our season finale of Don Quixote and when our 2014-2015 Season opens in October!