With Company promotions announced last week, we are thrilled to welcome two Miami City Ballet School (MCB School) students who have been invited to join Miami City Ballet for our 2014-2015 Season. We extend a big congratulations to students Ellen Grocki and Alex Manning for becoming official members of the Company! Learn about these dancers and their reactions to the exciting news below! 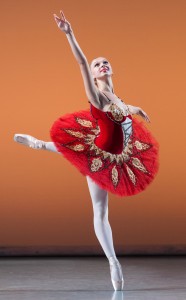 I’m a small town girl from good old Damascus, Maryland and started ballet when I was three years old. I trained under Florence Gardner for six years in Damascus, and then under Patricia Berrend at Berrend Dance Center in Olney, Maryland for seven years. In the summer of 2012, at age 16, I attended the Miami City Ballet School Summer Intensive. It is so funny to think back to the first time I danced in these studios, and how nervous and inexperienced I was. That summer truly made an impact on me, and I was ecstatic when I was offered an invitation to stay at MCB School for the winter term. Somehow, my mom let me go, and I had an incredible year with the school. I had the opportunity to perform in The Nutcracker with the company that year, and that was when I really fell in love with Miami City Ballet. Being in those rehearsals and getting the chance to dance onstage alongside such exquisite dancers made it clear to me that I wanted nothing more than to be a part of this Company. Currently, this is my second year at MCB School and my first year as a Student Apprentice with the Company.

The day I was promoted was a normal Thursday, like any other. I was getting ready for class at the studios when I was told that our school director Ms. Callaghan wanted to speak to me. I walked into her office, completely oblivious to what was about to happen, and the first thing she said was, “Ellen, I have good news.” Now, for the past two years, every day before dance class, I would say to myself, “You are the newest member of Miami City Ballet,” to try to encourage myself to keep working harder. Then in that moment, when Ms. Callaghan finally said those words out loud, it didn’t seem real. I skipped all the way down the hallway to the last studio surrounded by windows and just danced and jumped around by myself. I called my family and we were all crying. Then I hopped right back into modern class, knowing that I was one step closer to achieving my dreams. Everyone in the company has made me feel so incredibly welcome as a new member of the corps de ballet. I cannot wait for all that the upcoming season holds, and I am so excited to be a part of it.
-Ellen 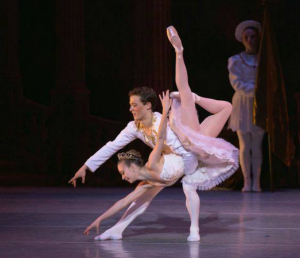 I am from State College, Pennsylvania. I first trained at a small school there called the Ballet Theatre of Central Pennsylvania. When I was 13, I went to the Walnut Hill School for the Arts for my Freshman and Sophomore years of high school. Then, I moved to a small apartment in Carlisle, Pennsylvania with my mom and sister to attend the Central Pennsylvania Youth Ballet (CPYB) under the direction of Marcia Dale Weary. While at CPYB, I also studied privately with Laszlo Berdo and Leslie Hench. Last year, I auditioned for Miami City Ballet and was offered a Student Apprenticeship with MCB School. This was my first and only year here at MCB School.

Last Friday, I had a meeting scheduled with Ms. Callaghan, the school director, before class in the morning. I remember not sleeping for the whole night, and in the back of my mind I was not feeling very positive. I kept seeing talented male dancers come in to audition and thought I was just too inexperienced to be hired this year. But when I walked in to see Ms. Callaghan, she sat me down and immediately told me, “Congratulations! Ms. Lopez would like to offer you a contract.” I didn’t even know what to say. I was so shocked! I immediately hugged Ms. Callaghan and almost started crying in her arms. Then I asked, “Is that all?” And she laughed and told me “that’s it!” So I ran out to call my friends, parents and teachers. I was so thankful that all of those years of hard work with those special people helping me along the way had paid off. And I’m so proud that this all happened here at Miami City Ballet!

Audience members will have the opportunity to see Ellen and Alex perform with both the Company and MCB School before our 2013-2014 Season comes to an end. Catch them during MCB School’s Student Choreography Showcase on April 26th and the Miami City Ballet Ensemble performances on May 2-3 — both at in-house studio theater in Miami Beach. Or, see them on the mainstage during our season finale of Don Quixote and when our 2014-2015 Season opens in October!

Check out the Company promotions here!