Nutcracker season is that most magical time of year when aspiring professional ballet dancers across the country see their hard work pay off with the ultimate gift – a lead role in the country’s most famed ballet.

Four such dancers from Miami City Ballet School — Dominick Sherer, age 14, Allegra Richerson, age 11, Carolina Rodriguez, age 9, and Neo Del Corral, age 9 — recently learned they will perform starring roles. The young ladies, Allegra and Carolina, will each have a turn at portraying brave Marie – the heroine of the story. The young men, Dominick and Neo, will each perform the role of Prince, an important character who serves as Marie’s convincing guide as they journey into a magical Land of Sweets. We were fortunate enough to steal a few minutes of their time between their busy school, ballet, and rehearsal schedules. Here they share with us their excitement to perform in Miami City Ballet’s cherished holiday spectacular, George Balanchine’s The Nutcracker®.

Allegra has been training at MCB School since age three and desires, more than anything, to perform the role of Sugarplum Fairy one day. She describes the moment she discovered she’d been offered the coveted role of Marie, “I was in the car, coming from school and just about to go to ballet class. My mom gave me this little nightgown and a doll and said, ‘I hope they give you a bigger one [doll] when you’re Marie.’ I was so happy, I screamed!”

Neo, who recently joined the school year-round after attending a summer intensive, can hardly contain his excitement at being offered two significant roles, Fritz and the Prince. Neo, who strikes this writer as having a hint of real-life mischief like Marie’s ornery little brother, Fritz, can’t wait to share his love of dancing with a live audience.

When asked why he likes to dance, Neo muses, “I don’t know. I just like to dance. When I was a baby, I knew I wanted to dance because I saw my sister dancing, and then I just opened the door [to the studio], and I snuck into the dance class when I wasn’t supposed to. My mom said, ‘Oh, I guess you really do want to dance!’” And Neo’s been happily dancing ever since.

Carolina is “honored and grateful” to also be cast as Marie this year. She can’t wait to perform before her friends and family, especially her twin brother who will be cheering her on from the audience. When she grows up, she wants to perform “Sugarplum Fairy, Coffee, and Hot Chocolate,” and dreams of one day being a famous ballerina. (MCB principal dancer Jennifer Lauren is her role model.) When asked what one wish she has this Christmas, she contemplates for a moment and then goes big, saying that she wishes she could meet the jolly man himself… “Santa Claus!”

A bona fide MCB School Nutcracker veteran, Dominick has danced many roles, including Soldier, Fritz, and Prince. He even got to travel to Los Angeles for the 2017 premiere of MCB’s Caribbean-inspired Nutcracker. 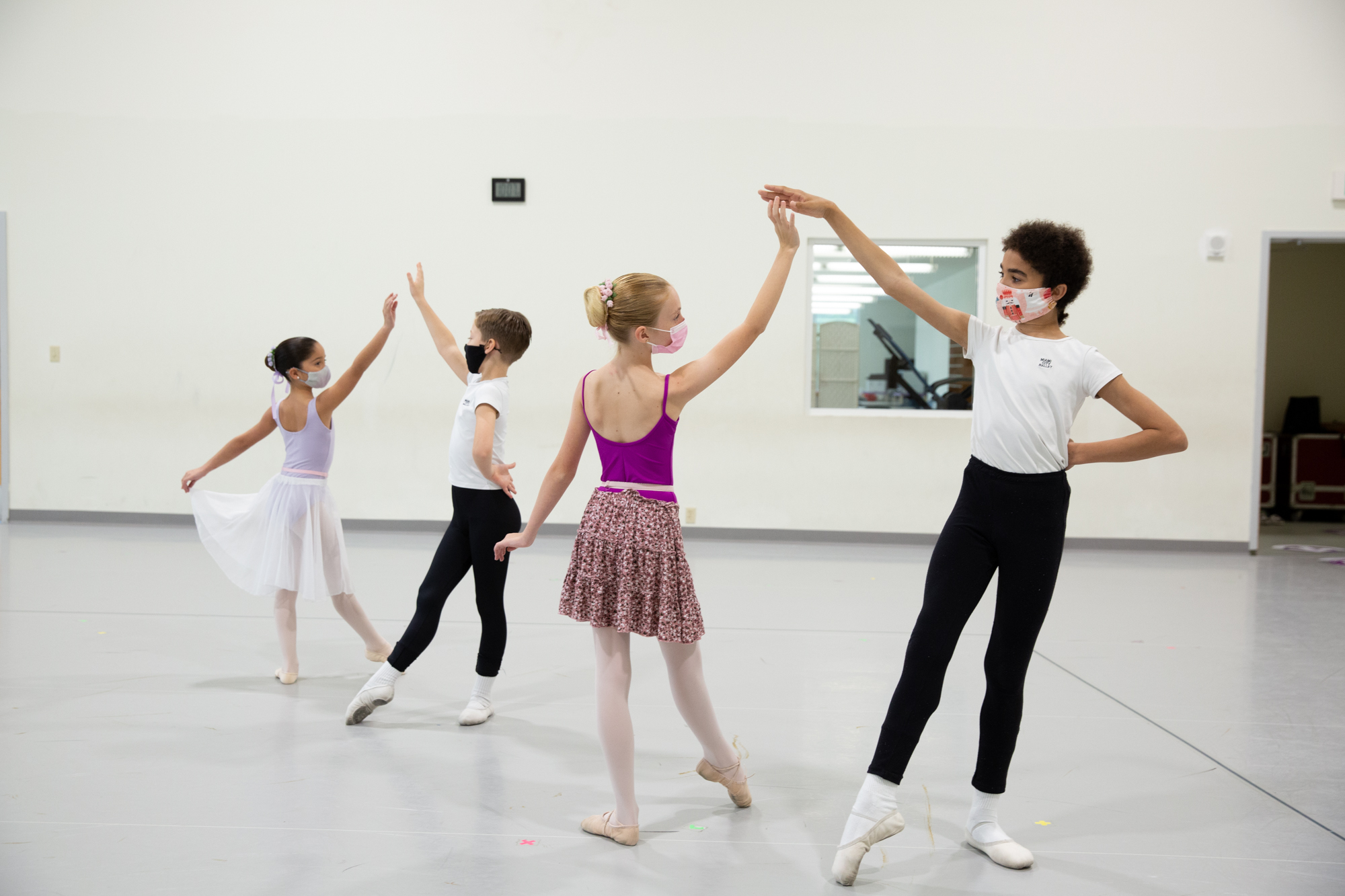 Dominick, who wants to be a pilot and a principal dancer, recalls some on-stage mishaps. Including a rather scary time when he was flying high in the closing scene. In the grand finale, Marie and the Prince are magically whisked away in a flying air balloon. One night, the balloon got stuck, leaving them suspended in the air, dangling above center stage. Having to improvise, Dominick calmly waved and waved at the audience until the crew realized the technical trouble and drew the curtain closed. Thankfully, the production staff was able to get the dancers down safely.

He adds, “One time, I was practicing the battle scene during tech rehearsal. It’s super dark on stage with the head piece on and hard to see. So instead of going where I should, I walked straight into the curtain! I immediately walked right back out and thought, ‘Nope, nope, got to get back out there, you did something wrong.’ So, I walked back as fast as I could.”

To avoid this all-too-common dilemma, Dominick shares this useful tip, “Follow the spotlight.”

For Dominick, Allegra, Carolina, and Neo, it is safe to say that these talented young dancers are not only following the spotlight; they are bravely stepping into it. All in pursuit of achieving their very real and seemingly attainable, dancing dreams.