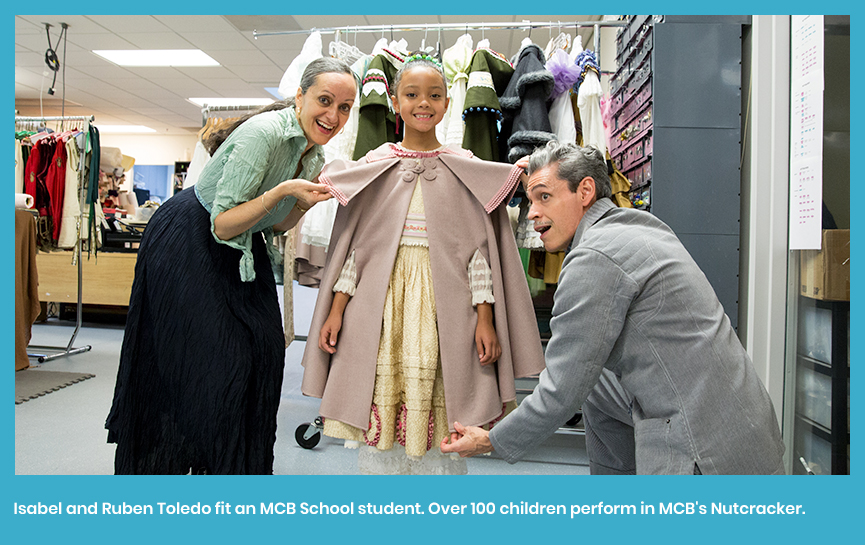 Cuban-American designer Isabel Toledo’s Nutcracker costume designs are so remarkable that it is impossible not to lose yourself in them.

Cuban-American designer Isabel Toledo burst onto the fashion scene in 1985, immediately drawing praise from the fashion industry elite for her bold shapes and expert pattern cutting tinged with an explicit femininity. Known as the ‘radical classicist,’ Vogue, a longtime supporter, labeled her “a designer’s designer,” stating, “she let fabric and material guide her, draping in ingenious and elegant ways.”

This design genius is on full display in MCB’s production of George Balanchine’s The Nutcracker®. Isabel, with her husband Ruben (who designed the sets) always by her side, created a magical dreamscape to revel in for generations to come. Or, as Ruben explains, “Through color and the use of beautiful soft-pastels – because of the candy land, and children, and the idea of Miami sunsets and sunrises, the sherbertness of it all – one beautiful vision.”

Throughout her career, Isabel made the statement, “Fashion is what time looks like.” This sentiment is brought to life in staggering proportion with the 200 costumes she created for MCB. Isabel and Ruben frequently expressed the importance of tapping into “all the possibilities of what makes children’s imaginations so vivid and alive.” Look closely, and you will see a Land of Sweets so remarkable, so attentive to detail, that it is near impossible not to lose yourself in Isabel’s snapshot of time.

Isabel Toledo passed away in August 2019. Isabel and Ruben made a huge impact during the time they spent at Miami City Ballet working on The Nutcracker.