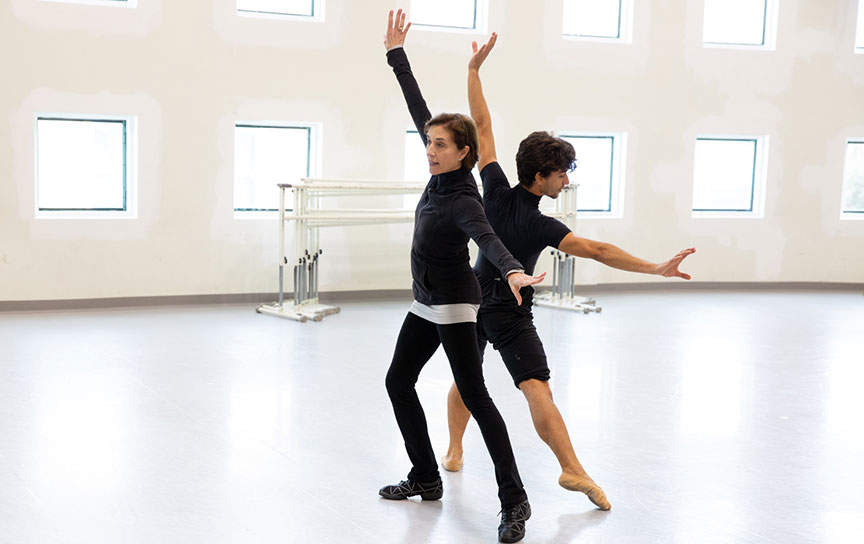 Behind the Ballet with MCB Artistic Director Lourdes Lopez

“For Jerry [Jerome Robbins], it was very much like theater, every step had meaning, and every ballet had a story – it was all theater.”

“We will be the first Company to perform I’m Old Fashioned outside of New York City Ballet, which is the company he made it for..” – Lourdes Lopez, MCB Artistic Director

As a Soloist and Principal Dancer with New York City Ballet, MCB Artistic Director Lopez danced for two legends of the art form, George Balanchine and Jerome Robbins. In a short interview Lourdes gives us insight into I’m Old Fashioned and working with Jerome Robbins.

The questions below were originally asked by Orlando Taquechel in an interview for Artburst Miami and appeared in El Nuevo Herald on Friday Jan 10. Read the full article here

Q: What was your experience working with Jerome Robbins?

A: I loved working with Jerry. He was a task master and demanded everything from a dancer, but that is how it should be and he got results. With me, he was always very respectful. In his mind he had a set vision of how a role to be danced and portrayed and you had to fit yourself into that vision and you could not deviate from it. This was unlike Balanchine, who was interested in what you were going to do with the part. For Jerry, it was very much like theater, every step had meaning, and every ballet had a story – it was all theater.

Q: Which role did you performed in I’m Old Fashioned?

A: I performed what we call the Waltz girl, or the girl in Blue. I had two pas de deux, bumps, then a variation and then another pas de deux.

Q: As a performer, what are the differences between the styles of Robbins and Balanchine?

A: They are actually similar, in that both are based on the classical vocabulary and they were both interested in the musicality of a step.

Balanchine wanted speed, clarity, energy, precision, he wanted to see the steps clearly to the music and he was very interested in what the dancer would bring to a role.

Robbins wanted his ballets to have more drama, the steps were softer, more muted, there was nuance. At times Robbins even preferred that dancers ‘mark’ specific steps, meaning, under dance them. He wanted the dancer to look relax, never forced and never, ever playing to the audience. It had to look authentic and real, with an emotional intent behind the steps.

A: It’s a ballet that I feel audiences and dancers love, because it takes them to a bygone era, it’s a beautiful and feel good work and yet, it’s entertaining. Also, it’s the idea that the ballet starts and ends with a film, is pretty unusual…